Home
RYDA Newsletters
About Us
Tide Table
Contact Us

It is thanks to Lesley Dempsey, the web administrator for the RYDA website, that this new information has come to light. It is all contained on a website that is dedicated to the RMS Royal Edward. The local interest is that, when the Royal Edward was sunk in 1915, one of those lost was Henry Finch. Henry had been born in Membland and had been a gamekeeper on the Membland Estate.

The Royal Edward had been launched in 1907 as an ocean passenger liner. After being sold to a Canadian company, she was requisitioned in 1914 by the Admiralty for use as a troopship. She was first used to bring Canadian troops over to Europe, but in July 1915 troops embarked at Avonmouth to be taken to Gallipoli.

There is much more detail of great local interest on the website but the following should whet your appetite to read more.

Henry was born in 1867 at Keeper’s Cottage Membland, the son of William and Susanna Finch. William was one of Lord Revelstoke’s gamekeepers and Henry was later also employed as a gamekeeper. In 1889 Henry married Ellen Horton in the recently-completed St Peter’s Revelstoke.

There is also an astonishing account of a severe snow storm on the night of 9th March 1891. The storm raged all night and the account records that the snow was 14 foot deep at the front door of Membland Hall and over 1,000 trees were lost on the Estate.

In 1899, by which time Henry and Ellen had 6 children, the family moved to Cornwall where Henry was employed as a gamekeeper on an estate near Tregony. However in 1909 the Estate was broken up and all the employees lost their jobs. Henry then found local work as a rabbit trapper.

At the outbreak of the First World War, Henry joined up as a private soldier with 18th Labour Company, Army Service Corps. He was 47. Ellen was left behind with 9 surviving children and another on the way. 18th Labour Company embarked on the Royal Edward bound for Gallipoli.

After docking at Millbay and then transitting through Malta and Alexandria, the Royal Edward was off the island of Kandeloussa in the Aegean on 13 August 1915. It was Friday 13th. The ship was struck by a torpedo from a German submarine and sank within 10 minutes. 935 men were lost although some accounts give a much higher figure. The names of all those lost are recorded on the Helles Memorial at the tip of the Gallipoli Peninsula. Henry Finch sadly was one of them.

There is of course much more detail on the website and you are encouraged to read more:

About Henry Finch and life on the Revelstoke Estate (including the snowstorm) www.royaledward.net/the-gamekeeper/

The Last Voyage of the Royal Edward www.royaledward.net/the-last-voyage/

Chapter 2.1 Membland and the Barings 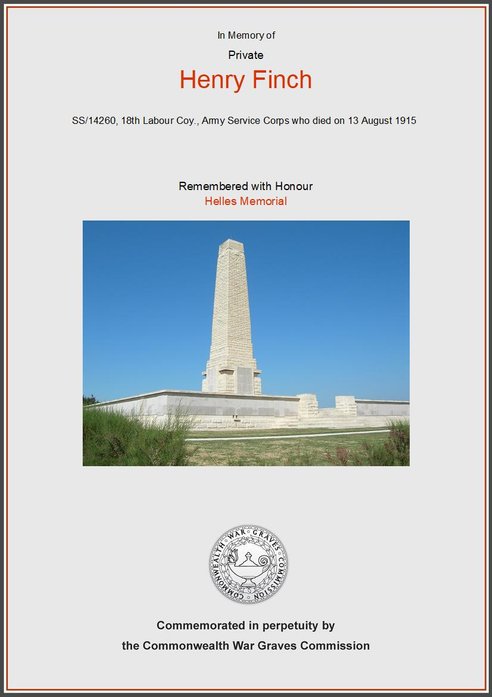 Chapter 2.1 Membland and the Barings. - Membland Hall
SPIRIT OF THE YEALM