Home
RYDA Newsletters
About Us
Tide Table
Contact Us

Introduction.               Tony Baker, who is now approaching 90 and living near Bath, together with his daughter Kathy Baker-Johnson, have put together a series of memories of life in the two villages spanning the 1930’s and through the second World War.

The photographs demonstrate very well, both in their formality and the clothes worn at a time of severe shortages and rationing, that everyone did their best to maintain the standards of the time. We know the names of two of the small trio that provided accompaniment for the old time dancing during the Blitz on Plymouth. Mr Hele and Mr Easton. If anyone can identify the drummer it would be good to hear of his name. 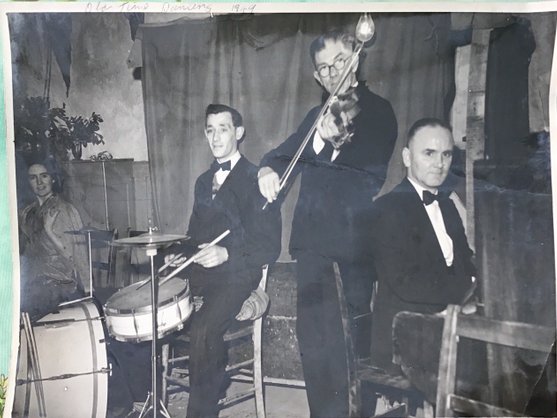 Tony Baker’s recollections are best recorded as he wrote them.

In early Spring in the 1930s children from Holy Cross Church School Newton Ferrers picked bunches of primroses and took them to school. These were then carefully packed into a cardboard box by the headmistress Miss Lancaster and posted off to a junior school in Plumstead, East London. A letter of thanks was always received and read out to the school.

Newton Ferrers in the 1930s – Deliveries.

Residents were well served by deliveries in the 1930s. Milk was taken on rounds by Farmers Shannon and Kingcombe, using their ponies and traps. Milk was carried in large churns complete with brass taps and measured out in half or full pint imperial standard dippers.

Butcher Roach did his deliveries of meat, again with his pony and trap, having taken his orders earlier in the week or on his delivery the week before.

A representative from the Co-op shop took orders during the week, and later these parcels were delivered by Farmer Hosford with his horse and covered wagon. Mr Doddridge the carrier later took over this duty.

The Women’s Institute Hall in Wartime.

The WI Hall was a hive of activity during the 1939-45 War. When food rationing began to bite, cookery demonstrations to make the most of what was available were given by Mrs Gibson, a Domestic Science Teacher from Plymstock Senior School, usually on Monday evenings. Later there were whist drives in aid of the Red Cross organised by a Mrs Shepherd.

Wednesday night was “Welcome Home Fund” Dance nights. Music was provided by Mr George Maddock (probably the first Disk Jockey in the villages) with the help of turntables, amplifier, loudspeakers, and a load of old 78rpm records.

Strict Tempo was provided on the radio by Victor Sylvester and Mantovani, and Boogie Woogie by Glen Miller. These dances were well attended by locals and service men and women in the area, the dance floor being packed by the end of the evening.

Thursday evening was a travelling cinema, again nearly a full house every week.

There were occasionally Saturday night dances, music being provided by local musicians.

Plymouth’s air raid warning system started to wail at about 6.20pm on the evening of the 27th November 1940. The Barrage Balloon Battery was visible in the sky before nightfall. Over the evening the drone of enemy bombers flying over and anti-aircraft fire increased in intensity. Around 9pm there were some terrific explosions, and blast threw shrapnel and stones all around the houses.

A stick of bombs had straddled the original 16 houses falling to the East and West, front and back. The closest bomb fell in Farmer Shanon’s field just west of number 1. When it exploded it created a crater about 30 feet across and occupied what are now numbers 17s and 18s back gardens. One fell in the field just across Newton Downs Lane. The other two to the South East of number 16, again in Farmer Shanon’s field. The largest of the two failed to explode and was dug up by a Bomb Disposal Squad a few days later. Residents were warned to open all their windows to reduce the effect of the blast of the bomb they were about to destroy. There were some broken windows from the original explosion, and it is understood that over 800 damaged roof slates had to be replaced. Miraculously nobody was killed or injured. Air raids continued to the end of 1943 but Butts Park had had its share of the Blitz.

Of the German POWs in custody at RAF Collaton Cross four rather “elderly Trusties” regularly attended Matins at Holy Cross Church dressed in long dark overcoats with brightly coloured patches, highly visible when they walked between the camp and the church. At Christmas they sang “Stille Nacht, Heilige Nacht” to the congregation from the choir. Both the POWs and the congregation were deeply moved.

In the late 1940s there was a thriving old time dancing club in the villages usually held in Noss School, with numbers varying from 50-60 on average. Music was provided by Mr Hele on the piano, Mr Easton on the violin, and as you have seen above, we would like to know who handled the drums.

As you can see these events were extremely popular. 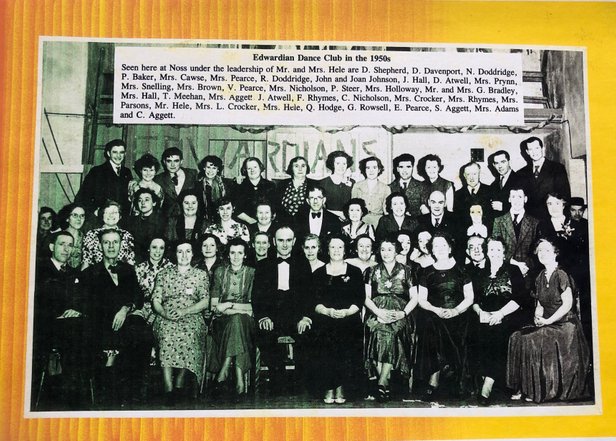 Gymkhanas were held in the late 1940s and early 1950s in the field behind Beech Cottages. Competitors came from as far away as South Brent and the Tavistock area and were very well attended.

SPIRIT OF THE YEALM